It’s here! Get your copy today and have a good time.

“Longears and Losers” introduces several new characters, man and beast, which includes a barren of mules they turn into pets that thrive on the same affection the Gartenberg family gives their dogs and other animals that call Plantation Gartenberg home. The most abounding and lovable human of the introductions is Paddy O’Brien, the mule trader that hails from Show Low, Arizona. O’Brien adds spice and shows the reader what true friendship is.

Ad Gartenberg is critically wounded by a well-placed gunshot and would have bled to death be it not for Janae, his quick-thinking wife. Ad’s loving family and the host of friends he’s unaware of divinely pulled him through a long stay in the hospital’s intensive care unit.

It turns out that a sore loser from his past was responsible for Ad’s mishap and conspired with several other miscreants to terrorize the Gartenberg family and pay Ad and Janae back for an inconsequential event they’d long forgotten.

In the sinister plan to cause the Gartenbergs’ harm, intimidate and terrify them, Michelle and the baby are victims of a frightening incident that ends when Michelle pulls a hidden gun from her purse and uses it for what guns are used for.

Jean Troy and Cynthia, his best friend, are accosted by brigands but escape an agonizing end by a fluke of fate that could only happen to a Gartenberg. A praiseworthy reality is revealed to the parents of the two kids as a result of this event.

Other unexpected visitors come to Plantation Gartenberg and turn out to be valued additions to the place.

The group that’s responsible for the trepidation and horror the star family has experienced is revealed in the end. The reader will be totally surprised when close to the end, the villain’s instigator and leader and participants are revealed.

For the time being “Longears and Losers” is the last of the “TOD” series, “TOD” and “The Orchard” the first two books. The way I ended L & L; however, leaves plenty of room to continue the Gartenberg story if I decide to. — Alan K. La Selle

Read an Excerpt from Longears and Losers

At the pharmacy window Ivan looked at the nametag of an approaching man wearing a short sleeved dress shirt and tie, the long-established pharmacist’s uniform. Before the man could say anything, Ivan said, “Mario, my name is Detective Ivan Velovoski and I’d like to talk to you about your sister.”

Now he felt foolish because he didn’t have the sister’s first name. He showed his shield and ID.

“I’m sorry but I don’t know her first name.”

Mario smiled, “You don’t have to. I only have one sister the police would be looking for. Of the others, three are nuns; the other four married successful businessmen. I doubt they would have done anything more dishonest than not paying a parking ticket. They’re pretty straight laced. What in the name of Ollie has she done now?”

Ivan could see three employees gathered within ear shot. “Can we go somewhere else?”

Mario looked around, “Oh, I see what you mean. Sure, come to my office and I’ll close the door if I can find a place for all the crap that’s in there.”

He walked to the end of the counter and waved for Ivan to follow. A security door opened, Mario stepped out and motioned Ivan through.

Ivan went to the first door on the left and started through it. He was forced to stop. Mario had a point. The office was beyond cluttered. Everywhere he looked were boxes, files, supplies, magazines, empty pizza boxes and every other constituent made of paper or cardboard. Mario took three file boxes off of a chair and precariously balanced them on top of another pile of stuff piled against a wall. He moved the chair so Ivan would have a place to sit, and then kicked a pile of papers and clutter into the hallway. When the door could close, Mario chuckled, “Come on in so we can have some privacy. There’s little of that here. Cabra is a small town and everybody knows everything about everybody else. The whole town will have my sister as a working Las Vegas call girl, a mass murderer and serial rapist of small children before the sun goes down.”

He moved some stuff off an office chair behind a small metal desk, “What can I do for you detective?”

“Sir, I must apologize for waltzing in here causing rumors about your sister.”

“It’s all right, not necessary”, he laughed again. “Over the years most of the stories about my little sister have been true. Now, there are going to be a few about you.”

“I guess if they’re talking about me, they’re leaving everybody else alone,” Ivan quipped.

Mario countered, “That’d be true anywhere but in Cabra. Here the busybodies talk about everyone else at the same time. If they haven’t heard any juicy gossip, they make it up. No one’s safe. Now, what can I do to help you?”

“I understand your sister is a doctor. You didn’t tell me her name, did you?”

“No I didn’t. Her name is Consuelo. We call her Connie. Yes she’s a doctor. She was the smartest one of us fourteen kids. At every school she attended she graduated early and in the top ten of her class. In medical school she carried an A average and entered residency ahead of the students she started with. I don’t think in her life she had a grade below a B. She was smarter than Ollie.”

Ivan interrupted. “Pardon me Sir, but who the hell’s Ollie? You’re the second one I’ve heard that from this morning.”

“Oh that. I don’t have any idea. It’s just something people here say. Smarter than Ollie; dumber than Ollie; crazier than Ollie; madder than Ollie; meaner than Ollie; nicer than Ollie. If you stay around Cabra that’s not the only nonsense you’ll hear. Most of the other poppycock though, makes reference to a woman’s body. Ask me no questions and I’ll tell you no lies,” he grinned.

“Getting back to Connie; she practiced medicine at University Hospital in Albuquerque for several years then moved to San Diego, California. She stayed there for five or six years then quit being a doctor. She told me she had enough money to retire and moved to Albuquerque and played. Over time, several husbands joined her between the bedsheets. Connie scoffed the institution of marriage and instead made divorce a divine convention. She always managed to marry men with more money than she had. Her alimony receipts are astronomical and I think she continues to entertain the men she married. She’s hard to not love, no matter what she’s done. Connie is promiscuous, flirtatious, beautiful, gorgeous, fun, lovely, loving, wild, adventurous and crazy. I don’t think she ever met a man she didn’t have designs on. She’s the youngest of our family and probably the one of that drove our Dad to his grave. Mom’s still with us and constantly fusses about Connie. Consuelo is a topic of every conversation my family has. If it weren’t for her we wouldn’t have much to talk about.”

“After my crazy sister got tired of retirement she decided to take up medicine again, enrolled in continuing education classes, renewed her license and started a private practice in El Paso, Texas. She’s been there for three years and doing well from what she tells me. What has she done that would bring you to talk to me?”

Ivan began, “There was a man shot in the knee by a woman he kidnapped. The woman escaped and the man disappeared. He’s wanted for the woman’s kidnapping, of course, and is probably connected to the shooting of the woman’s father among other crimes against that family.”

“From an informant, I heard about a doctor in Cabra that treats gunshot wounds and doesn’t notify authorities. He said the doctor did something for him without charge and would treat any wound or injury and didn’t ask for remuneration. I want to talk to the doctor about the guy that was shot. Have you seen your sister in the past month?”

“I haven’t seen her, but that’s not unusual. She marches to the tune of her own drummer, not mine. I don’t know anything about a clinic she may have here, but nothing would surprise me when it comes to Connie. She is a compulsive creature and walks on the wild side more often than not. She thrives on adrenaline. If you find her will she go to jail?”

“I won’t put her in jail if she gives me the information I want. When it comes to testifying before a grand jury or any jury, it depends on how cooperative she is, and what laws she’s broken, if she’s broken any. If she works with me I’ll talk to the judge and prosecutor and try to convince them that she’s done nothing very bad and tell them she’s been cooperative.”

Mario looked at the ceiling while he contemplated what I said. He finally answered, “Connie has remained friends with a girl she graduated from high school with. She’s married to a cattleman that lives south and east of here. Their name is Garcia, Rex and Lucinda. Lucinda is gorgeous, just like Connie and shares with Connie all the other attributes. It’s rumored that Rex has his hands full.”

“When you said a place close to Cabra it didn’t come to me at first. Now I wonder if there may be something the Garcias’ could help you with. Lucinda and Connie were fast friends and did everything together.”

Going on, “Father Basil banned them from mass because they never went to confession. Eventually the girls agreed to go to confession to get out of trouble at home. I think Dad threatened Connie with his belt, something he rarely used on any of us. If she went to confession and took Lucinda with her, the Good Father agreed to lift his banishment.”

“They went to confession individually, of course, and were in the confessional for two or three hours each. People that saw Father Basil afterward said he was red-faced for hours and spent many days fasting and praying. Later, the Good Father went back on his word and, without explanation, continued their banishment. He said he couldn’t, in good conscience, allow those young women to associate with other Catholics in his flock. He honored the secrecy of confessional canons and didn’t divulge what sins the girls admitted to, but indicated their wicked admissions were what made him change of mind. Wild stories came out about the girls activities.”

“When rumors started about what they told the elderly priest, it was said the girls provided such vivid descriptions the old vicar was exceedingly mortified. If the girls hadn’t offered standalone verification of their adventures, it was so outrageous Father Basil wouldn’t have believed them.”

“In the midst of all this I came home from college on break and heard from someone there was only a handful of young married men in town who didn’t immediately go to confession. This deluge of male sinners to the confessional further helped the priest believe the girl’s stories.”

“What happened was good for the local florist and gift shops because the young husbands begin to frequently shower their wives with flowers and other gifts and spend more time at home.”

Mario laughed hard as he recalled his little sister’s exploits, “I was in college but Mom told me that Connie brought shame on the Lopez family that could never be absolved. Mom still won’t talk about it unless she’s wearing a veil and has lighted a candle for Consuelo.” 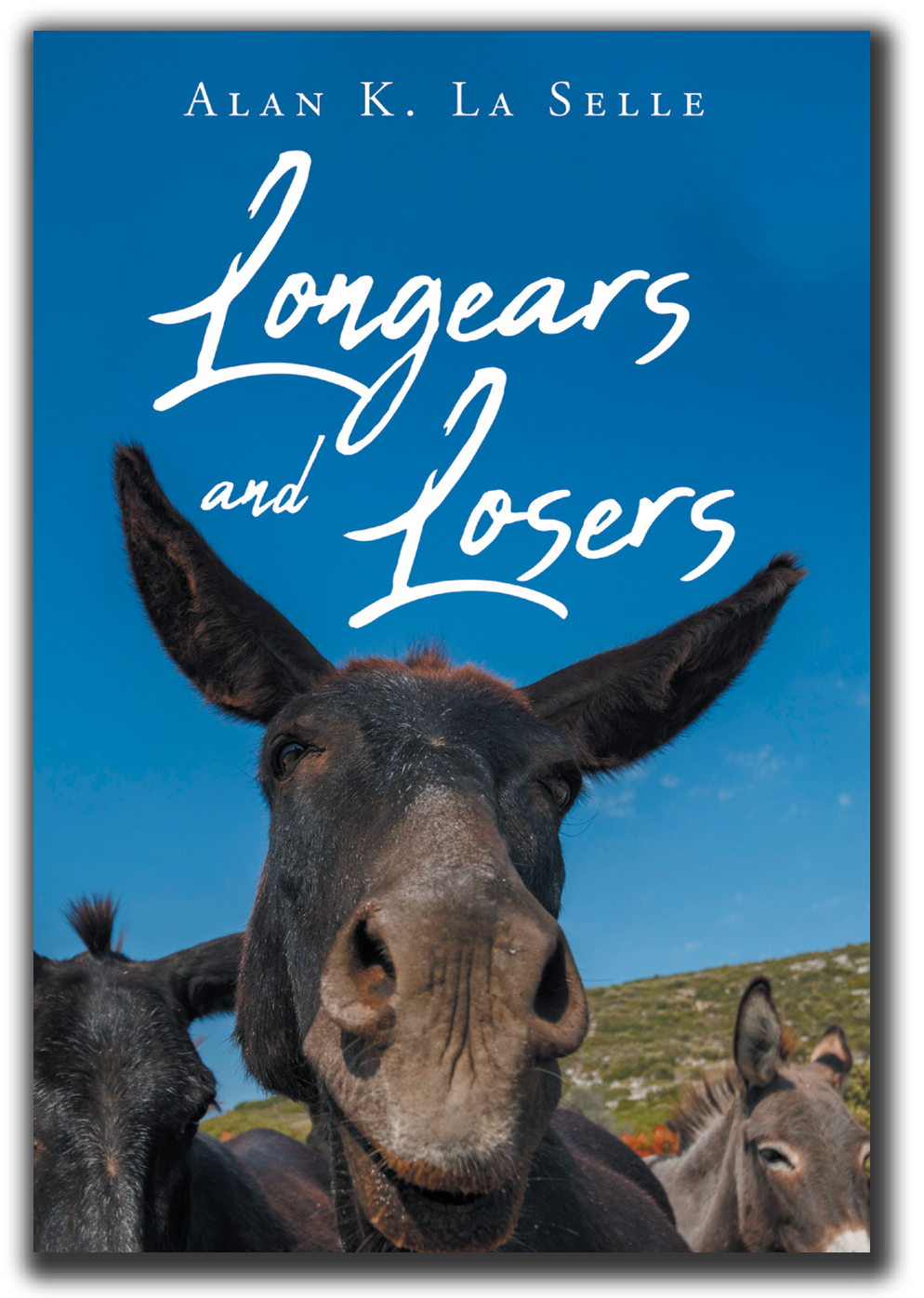